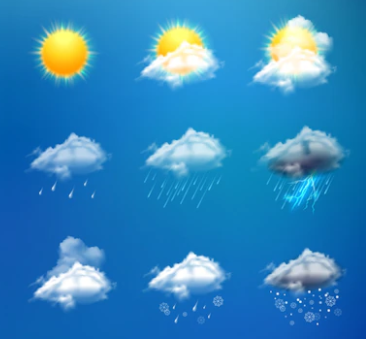 The empirical prediction of the atmosphere is one of the tools that popular knowledge has to try to predict the weather that will do throughout the year.

A bit of history

The particular case of the cabins: Murcia

A little history In ancient times man knew the cyclical changes that the Earth experienced through the regularity of celestial cycles, animal behavior, the movement of certain stars and through atmospheric phenomena that occurred during certain times of the year.

For ancient Greece meteorology consisted of a large dose of mythology, superstitions and knowledge that was had thanks to observations made by man and Aristotle was one of the first to make a division between science and divinity in his books About the sky, De the generation, Lto corruption, and Meteorological in which meteorology, astronomy and cosmology are studied.

The Romans also showed great interest in understanding atmospheric processes but with the fall of their Empire the process of research on meteorological phenomena suffered a halt in Europe for four centuries and it was the Muslims who took it up, grouping Greek, Persian, Roman and Indian knowledge andreintroducing the idea that celestial bodies are related to atmospheric phenomena and from them you can predict the weather.

In the Middle Ages, astrometeorology emerged as a science capable of predicting time from indications or observation of celestial bodies.

It is during the sixteenth and seventeenth centuries when modern or scientific meteorology as we know it today emerges abandoning the theories of Aristotle. Among the scientists of the time were Leonardo Da Vinci, Nicolaus Copernicus, Johannes Kepler and Isaac Newton. But these new theories clash head-on with the religious beliefs of the little, producing the rupture between the beliefs of the Aristotelian-Christian Middle Ages and the new currents that began with this scientific revolution. Because of this , astrometeorology would suffer a halt and would be relegated to the status of pseudoscience.

In the coming centuries and with the appearance of the barometer, the thermometer and the telescope the weather prediction suffers a great advance reaching our days with the collection of data regularly from meteorological stations distributed throughout the planet.

Timeindicators There are several weather indicators that are almost always used simultaneously:

The cabañuelas are a popular prediction method based on experience and observation of the facts and that relates the atmospheric state of certain days of the month of August with the coming time for each month of the hydrological year. The variety, in terms of the application of the method, of days, times of the year, and observations is very high, but there is unanimity in making them at the time of year of more heat; in Spain they are made in the month of August and in South America in the months of December and January.

As for the environmental indicators to take into account during these days we have:

• If the day is cloudy it means that it will rain more than normal.

• If the day is sunny we must look at the temperature of the day.

• If during the day it rains it is said that “the cabin has burst” and it is understood that it will rain less than normal.

• If the day is hotter than normal, indicator of month with more rain than normal.

• If the day presents a normal temperature, it indicates a month with normal precipitation.

• If the day presents a temperature lower than the norm, it is an indicator of a month with less rain than normal.

The particular case of the cabins: Murcia The cabins of Murcia are also set in the month of August, which predict the weather in two ways: ascending and descending, that is, the days 2 to 12 August correspond to the climate forecast of the first fortnight of each month, while from the 13th to the 23rd, descending or return phase, correspond to the second half of the same month.

The days 1 and 24 of August are very useful, along with the 24 of June (San Juan) and serve as a key to entry to the predictions, just as the 28 of August (San Agustín) is also, since they are the days in which it is convenient to look in greater detail given the amount of data that can contribute as a complement: wind and rain, very valid when making the forecasts with greater approximation.