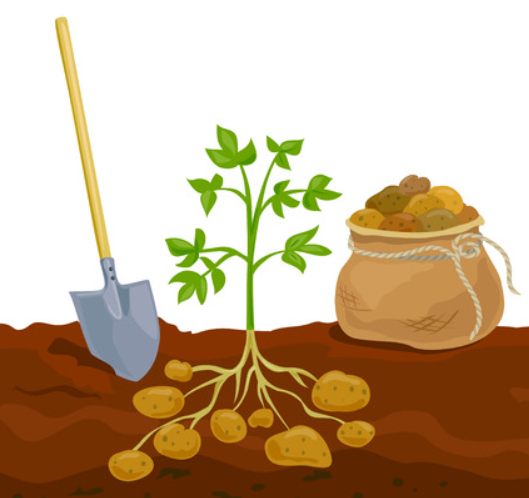 La potato is one of those foods that do not enjoy much popularity since we think they get fat. However, this tuber native to South America has many virtues;it must be consumed properly and at the right time. Let’s see how to grow it.

Physiology of the potato

Seeing this formula we have two ways to maximize the yield of the crop: maximize the daily production of our plant or increase the number of days of cultivation.

The main potato growing cycles in Spain are as follows:

Water and CO2 needs The potato is one of those crops in which it is better to spend on irrigation (to some extent) than to fall short. Throughout the crop cycle the soil should be at least 60-65% of the field capacity of the soil and at the time of piping a content below 70% of the field capacity will adversely affect the final yield; large fluctuations in the water content of the soil adversely affect the crop. Contrary to what we might think, only a small amount of water is used in the photosynthetic process; most of the water is used as a transport mechanism for photoassimilated from the leaves to the storage places, the tubers. Likewise, a high moisture content in the tissues of the plant maintains the turgor of this and therefore the opening of the stomata, with the consequent entry of CO2 which results in a higher photosynthetic rate.

Temperature The potato is a crop with a rather cool climate (especially in terms of night temperatures) and the best yields are obtained when the average daily temperatures are around 21ºC. With low night temperatures the breathing process slows down and a greater accumulation of starch in the tubers is achieved. The tuberization begins when the soil temperature is around 15-20ºC. High temperatures increase the rate of respiration and therefore increase the consumption of starch. Likewise, an excess of nitrogen in fertilization together with high temperatures produces a delay in the beginning of the tuberization stage and redistributes the starch in the aerial part to the detriment of the tubers.

The light The potato requires high light intensities and short photoperiod, hence the areas with a certain altitude are ideal for this crop. Under conditions of short photoperiod the aerial part develops less, the tuberiza plant before, the stolons are shorter, and the starch is redistributed towards the tubers.

Soil Potato cultivation extends within a wide variety of soils, although the optimal conditions to maximize yields are as follows:

We can use whole or chopped tubers; using pieces of tuber as a seed has the disadvantage of phytosanitary problems, mainly due to fungi and bacteria, but on the other hand the emergence of the plant is advanced and we will have fewer tubers, but larger.

As for the use of whole tubers as seed, the sizes are between 25 and 65 mm.

In general, the difference between using small or fat seed is as follows:

As for the age of the seed, if we use old seed the aerial part will develop less and the tuberization and maturation of the tuberswill occur sooner; if on the contrary we use too young seed it is possible that it is still in the dormancy period so we must break this by immersing the tubers in a 1.5% Thiourea solution for 1-2 hours or by applying gibberellins.

The potato is a plant with a weak root system so we must pay special attention to the preparation of the soil. The ideal is to give two subsoiler passes perpendicular to each other and then apply milling machine avoiding leaving the soil with too fine a texture to avoid compaction of this. Once the strawberry is passed, we make the horses at a height of 25 cm and a separation of 60 to 75 cm.

Planting density When we make a crop, the competition to exist can be posed in two ways:

If what we want is to obtain large tubers we must space the plants more and this is done when we have a lack of water or bad soils and it will help us to use small seed or chopped seed of tubers largedis. The normal thing is to use 40,000 to 50,000 plants per hectare, which means 1.5 to 2.5 tons of seed per hectare. If we look for many tubers, but smaller we will space the plants less.

Once we have our seed it should not be planted directly, but we must make the shoots appear, if it will not take a long time to emerge and the longer the shoot is underground the more chances we have of being attacked by pathogens. A pre-sprouted leg seed will emerge earlier and tuberize earlier. To make a correct pre-sprouting and obtain robust and green shoots, the seed must be exposed to natural light, but at a not very high temperature and must be conveniently ventilated.

If we understand as sowing depth the distance between the top of the tuber and the soil surface, the potato can be planted superficially (2 cm), at an average depth (2-5 cm) or deep (more than 5 cm) and this is a function of the age of the seed, soil temperature and humidity.

An old seed is sown superficially, when it is cold, if we are going to water in a furrow, if we are in an area of high rainfall, or if the collection is mechanized; if we sow superficially we must plant in a good caballón and keep the soil that surrounds the seed always moist (the more superficial we plant the higher and wider the furrow or caballón). It is planted deeper when temperatures are high, when we do not have enough water to water, if we can not make caballón or if we have a risk of attack of the potato moth.

Aporcado The work of aporcado consists of raising soil from the bottom of the grooves towards the crests of the horses in order to hold the plant, favor the appearance of adventitious roots and prevent the stolons from becoming stems; we must prevent the earth from exceeding the middle area of the plant. It is made when the plant is 10 to 15 cm tall and is repeated after 15 days.

The potato is a crop particularly sensitive to drought, especially during tuberization, and may require in our conditions up to 80 m3 per hectare and day.

Potato fertilization The potato is a very nutrient-demanding crop and responds very well to the application of fertilizers, either in the form of manure or mineral fertilizers.

A fertilizer plan for a potato crop with a yield of 25,000 kg/ha could be as follows: