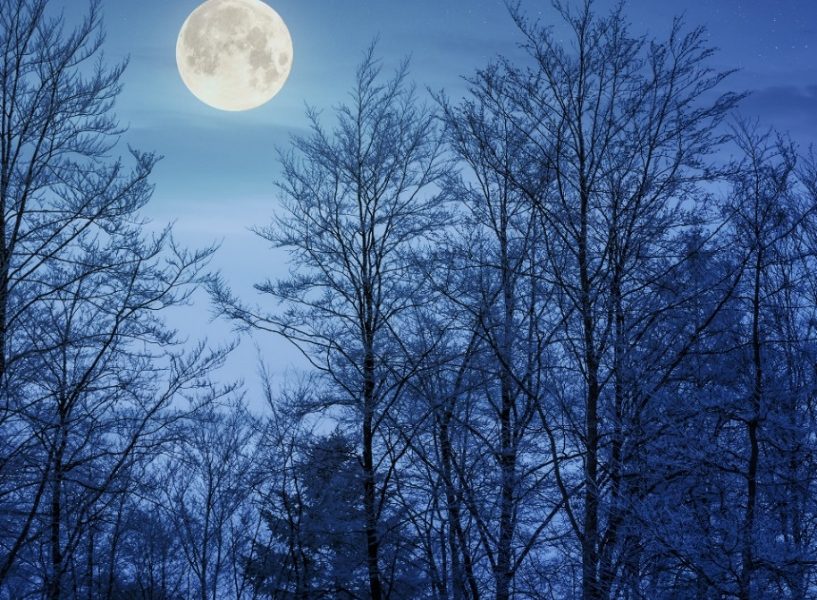 The full moon of November is known in Spain as Luna del cazador, Lone of the beaver in America and Lone of the frost or of the long night in other places. In November we are in the middle of autumn andthe shortening of days, the drop in temperatures and the increase in humidity slow down the daily life of plants.

It is time to prepare the plants for the winter, either by means of protective structures such as plastic tunnels or by changing them to warmer places; thespecies more resistantto low temperatures will suffice to stick them to a wall or wall facing south. The grass enters its stage of lethargy and it will no longer be necessary to cut it frequently and only in those southernmost latitudes will we continue with this practice, but much less frequently than the previous months. It is time to use a fertilizer rich in phosphorus and potassium; phosphorus promotes root development and potassium helps the thermoregulation of the plant and the water supply. We will frequently sweep the fallen leaves if we have deciduous and if we have abundant rains we will favor the drainage of the water to avoid flooding that can cause suffocation and rot.

Fertihouse fattening and maturation is a fertilizer solution with a balance of 0-7-5 that provides phosphorus and highly assimilable potassium.

Should be close to the windows so that they can take advantage of the dwindling light and as for the watering we must sin by default than by excess. Be careful to place them near air conditioners and in drafts.

In this month Istart the quietest season for horticulture. Citrus fruits begin to ripen earlier. Plantations of artichokes, lettuce, endives, spinach, chard, chicory, cabbage, broccoli, cauliflower, celery, beets, etc. they are not yet to harvest; Theplantation is done in September to start harvesting them at the beginning of December. The beans, which we will have planted at the end of September or the beginning of October, we will aporize them as soon as they have reached 15-20 cm in height without covering the plant more than half, as with the artichokes. The peas will be ready to start being tutored; take into account the low percentage of germination of this legume so I advise you to make a seedbed simultaneously to the planting in soil to have plants to replace the failures.

If we have a greenhouse and we have put peppers, eggplants, cucumbers, and zucchini we will start with the tutoring of the plants.

We are at the beginning of the flowering of the first indoor crop of the season. We will be careful in those northernmost areas with the temperature when the lights are turned off; it can go too low and affect the plants.

If all goes well, November is the month in which temperatures should drop enough to slow the advance of pests. In the horticultural air toumentan the problems of fungi because the humid conditions are maintained by the dews. Thus, among the most important fungal diseases, we can highlight the different types of mildew with different varieties specific to each vegetable, as well as Botrytis, Sclerotinia and Alternaria. In addition, problems of other fungi much more specific to certain crops can occur, such as Cercospora and Septoria in celery, or Stemphyllium in some types of lettuce. The recommendations to prevent or mitigate fungal damage in our gardens are the following:

If we have brassicas in our garden we must also watch for the possible appearance of the whitefly, Aleurodes brassicae. In the management of this pest, special care must be taken with the treatments, avoiding damaging the presence of auxiliaries, which are so important in the natural containment of this pest; We will also be attentive to the appearance of aphids. Also notorious are the problems of nematodes, probably Heterodera Cruciferae; se deals with plants that have a lower development of the aerial part and even foliar yellowing. In the underground part, when the infestation is very large you can see with the naked eye the adult females attached to the root.

We will still have attacks from the larvae of Lepidoptera; the populations of Plutella xylostella, and Autographa gamma will still remain stable, but Helicoverpa armigera, Spodoptera exigua and Spodoptera littoralis should begin the winter stop throughoutthe month , but as you know this is a function of the weather and one year does not look like another so we will be attentive.

It is the most delicate moment of the drill of the artichoke (Gortyna xanthenes) and Ostrinia nubilalis and for this you have to be attentive to the flights; in Murcia, for example, the monitoring of the flights of the drill is carried out by the Plant Health Service of the Ministry of Agriculture and Water. If this service does not exist, what we can do is create our own insectarium by introducing some stumps in summer to follow its evolution; keep in mind that in this pest the time of application of the treatments is very important and this is the moment in which the eggs hatch. There we will perform two separate treatments of 7 to 10 days.

As for Ostrinia it is convenient to carry out an adequate control, if we will not have problems in spring when we plant our peppers.

If we have planted zucchini and we are in a problem zone with the New Delhi Virus we must be especially careful with Bemisia tabaci; the first thing is to adopt the measures to avoid the installation of the pest, such as covering the plants with anti-thrips meshes, eliminating the weeds that can host the fly and especially making sulfur applications in sprinkling. If the fly is still installed in our garden we can make applications with phytosanitary products that are compatible with the auxiliary fauna.

In greenhouse tomato are dates of Alternaria, Botrytis and Stemphylium, in addition to oidiopsis and to prevent them good ventilation is essential. At this time the problems of Tuta, Bemisia and Spider Mite are few.

In stone and seed fruit trees it is the last month to carry out pruning:

In Almendro we must not forget that the almonds affected by the wasp remain in the trees, since at the time of collection their fall does not occur. These almonds have a whitish larva inside, which will spend all winter inside, producing the departure of new adults towards the middle or end of March next year. To reduce the risk of attack and prevent its spread for the following season we mustre-label the affected almonds of the trees manually preventing them from falling to the ground; the ideal moment is the total fall of the leaf, because it is when the almonds that have remained in the trees are best appreciated. These almonds must be destroyed immediately by burning, and should not be stored for use as fuel for stoves, or for livestock feed or other uses.

In grapes the fall of the leaf will have begun. Wecontinue in a period of selective pruning on the later varieties, eliminating the non-uveros shoots of next year. Eliminaremos the wood affected by wood fungi; the remains of the pruning must be removed outside the plot for destruction, preferably by burning them, taking into account requesting the appropriate prior authorization, or use them as biofuel if the amount of processed plant material is small. In case of presence of pathogens related to wood, it is not advisable to proceed to crush them and spread them directly on the surface of the soil. This technique, which is normally considered a good environmental and agronomic practice, in this case could favor the presence of fungal spores in the environment helping their dispersion. For this reason, it would be contraindicated. Other important measures in order not to favor the dispersion of any disease of this type is to prune separately the sick strains from the rest, as well as disinfect the pruning tools when passing from one to another.

In citrus if everything goes as it has to go the flight curve of Ceratitis will be descending but still we should not neglect, especially in the varieties that have not yet matured, since a rebound in temperatures can increase populations in a few days; lor even for lice and lepidoptera. It is time to be aware of the incidence of water in fruits, since this problem is favored by autumn rains , as well as by the condensation of moisture that occurs during the night and that can be maintained during much of the morning.

In olive trees in the southernmost areas, the olive harvest has been completed. In those latitudes in which it has not yet begun, we must be attentive to fly problems due to the safety deadlines of the products to be applied.

Remember that if you have to perform treatments against pests it is advisable to use products compatible with auxiliary fauna.