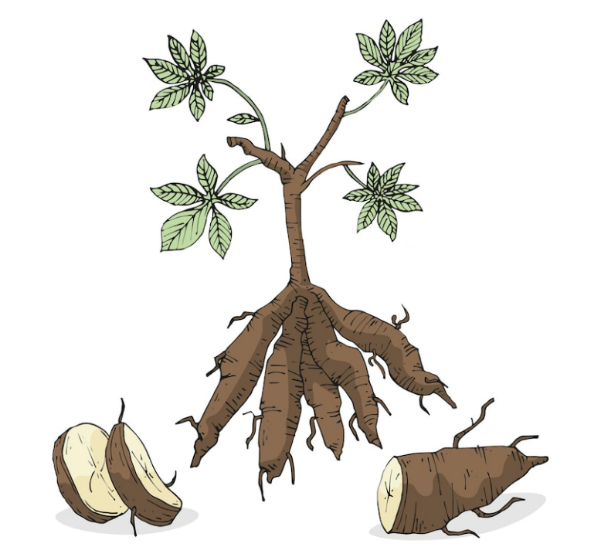 Cassavais one of the most versatile plants in the world and the fourth most important source of calories for the world’s population after rice, sugar and corn. Let’s start a series of articles to learn more about this plant.

Origin and distribution of cassava

is a plant whose origin is centered in the tropical and subtropical countries of the American continent and more specifically in the Amazonian territories. It is one of the most widespread crops in the world, although its commercialization on a global scale is very small since its production is limited to the self-consumption of the producing countries. The origin of this plant is in the northern part of South America and in the area between Mexico and Central America. The plant of the anduca is divided into two large groups:

There are data on cassava consumption as early as 2,700 BC. and in some tropical areas of Central America its cultivation and consumption begins even earlier than that of maize.

From America, cassava travels to the African continent by the hand of Portuguese navigators and from there to the Islands of the Pacific and the East.

Today 50% of the cultivated hectares of cassava are in Africa, 30% in Asia and the remaining 20% in Latin America.

The genus Manihot is formed by around 180 plants of good size whose main characteristic is the great development of its laticiferous vessels; the laticiferous vessels are the structures responsible for the segregation of latex and are present in various families of plants, such as Euphorbiaceae, Cannabaceae, Urticaceae, Moraceae, etc. and they are made up of a specialized type of cells called galactocytes that excrete a milky secretion. The secretion is intracellular and can be composed of carbohydrates, organic acids, mineral salts, alkaloids, lipids, tannins, mucilages, gums, proteins, vitamins, starch grains, crystals, etc.

cassava As in any other animal or plant species, the environment in which a certain species develops has a final influence on its morphology. In the case of cassava it can be found from sea level to 1,800 meters of altitude hence the remarkable morphological and physiological diversification of the multiple varieties of cassava.

Cassava is a perennial, woody shrub with a short photoperiod and the height of the plantscan range from 5 meters to 5 meters, although they usually do not exceed 2.5-3 meters in height. It is monoecious (in the same plant the two sexes occur in different flowers) and of sympodial branching.

The root system is not very thick but deep, being able to reach more than two meters deep, which gives the plant great resistance to drought. Thefirst stages are fibrous, but as the cycle progresses some branches (no more than 10) begin with their thickening; at this time the roots that will not thicken will continue to grow in length and those that thicken in width. The outermost part of the root is called the peridermis or “shell” and has a cork consistency. Below the peel is another layer called felodermis of less thickness and then the pulp, the usable part of the root, corresponding to more than 80% of the fresh weight of the root to the pulp.