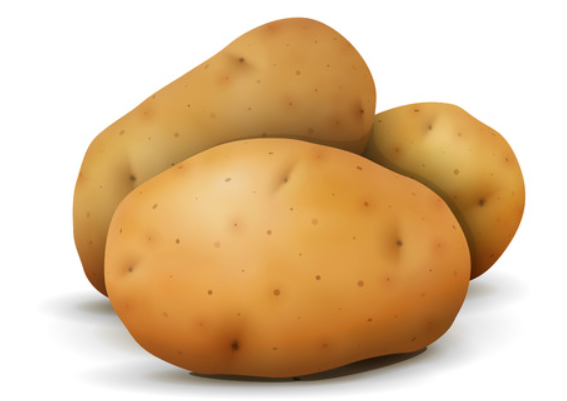 Physiopathies are the damages, mainly functional and / or morphological, that occur in plants and crops causedby agents of abiotic or non-living origin, such as atmospheric phenomena. Let’s know what are the main physiopathies that occur in potato cultivation.

Twisted sprouting Consists of the winding that the shoots suffer before the emergency. The curved parts of the shoot swell longitudinally or transversely, sometimes producing cracks. In the field there is an irregular emergence of the crop and plants of smaller size. Some affected plants have many more stems than might be expected from planting tubers. Twisted sprouting occurs when the stems have a hard time emerging from the ground. This can happen when the seed has been placed very deep, when on the back there is a crust difficult to cross or when germinated potatoes are sown with little vigorous shoots because they are too elongated or because they come from old potatoes. This physiopathy is also associated with low soil temperatures at the time of nascence and phytotoxicity to herbicides. To avoid this physiopathy we will not sow old or germinated potatoes with very long shoots, we will not sow very deep and we will avoid the appearance of crusts at the beginning of the crop.

Black heart The tuber of the potato performs the gas exchange with the outside through the lenticels; if the surface of the tuber is surrounded by water, the entry of oxygen is interrupted (at 10ºC it is enough that the skin is in contact with water 6 hours and two hours at 21ºC). If this happens the center of the tuber undergoes anoxia and the tissues become necrotic. It can also happen when harvested tubers are stored without ventilation and at low temperature. The separation between necrotic and healthy tissues is perfectly appreciated. When we cut the tubers nothing is appreciated, but after being exposed to the sun for a while the tissues become pink, then grayish, purple and finally brown or black; wet and viscous rot occurs. To fight against this physiopathy we must prepare the soil correctly for planting, avoiding waterlogging. With high temperatures we will collect the tubers immediately after their starting. In storage we will avoid high temperatures and take care that they have a correct ventilation.

Hollow heart It consists of the formation of a cavity in the center of the tuber, especially of the varieties that give large tubers, and is associated with an excessively large growth rate of this; when the culture conditions promote a very rapid growth of potatoes, imbalances occur between the development of external and internal tissues that generate small necrosis in the cells of the marrow. At these points there are breaks in the tissue and small cavities are formed that grow with the tubercle. A peculiar feature is that no rot occurs; a single hole or several star-shaped joins can be produced. It depreciates tubers for consumption, but these can be used for seed. Some varieties are more prone than others and to prevent this from happening denser planting frameworks are used so that there is more competition between plants; also an excess of nitrogen and / or a lack of potassium increase the possibility of this physiopathy appearing.

Secondary shoots This name groups three physiopathies caused by sudden periods of severe stress followed by others favorable to growth, which induces alterations in the morphology of the tubers and in their nutritional values; the plant does not present any external symptoms.

The development of the tuber can be stopped abruptly by fluctuations in the water content of the soil, by high temperatures (above 30ºC), especially with drought or by fertilization and decompensated irrigation. Some varieties are very prone to secondary growths. To avoid this, if we use chopped seedthe pieces should not be small and as for fertigation we will maintain a correct and uniform plan throughout the cycle without ups and downs.

The strategy to combat cold damage begins by using resistant varieties and adapting the planting date to the incidence of late frosts. Porch so that the tubers are always well covered with soil. Water in case of cold warning and apply potassium and phosphorus. Harvest with the pulp above 7ºC and keep the tubers stored above 3ºC.

Cracked tubers Cracking of tubers can be caused by a very rapid growth of tubers, in which case cracks occur along the longitudinal axis of the tuber. The other cause is mechanical damage during harvesting and the most sensitive are immature tubers and the largest; the damage is greater the more turgid the tuber is. A third type of cracking can occur and it is the one that occurs in the skin when the tuber undergoes a very fast desiccation after being unearthed. To avoid cracking we must maintain a constant moisture in the soil and not go over with nitrogen fertilization since this favors rapid growth. Use a planting density that avoids overly large tubers, harvestthe ripe ones and quickly protect them from desiccation once harvested. Needless to say, we must avoid beatings. Proper fertilization with calcium helps create resilient skin.

Lenticelosis it is a physiopathy that affects the lenticels due to an excess of moisture, both in the soil and in the warehouse; the lenticels swell and take on the appearance of white scales. Lenticelosis makes tubers prone to bacteriosis. Do not overwater, especially at the end of the crop, facilitate drainage and prevent soil compaction prevent this physiopathy. In plots with flooding, potatoes from the most problematic areas should be harvested as soon as possible and processed separately. Do not store wet tubers and keep them ventilated so that condensation does not form on their surface.

Mottling or “small gangrene” In our conditions, it is the most frequent physiopathy of foliar symptoms; it is often confused with fungal diseases such as Alternariosis, so unnecessary fungicidal treatments are made. It is a physiopathy caused by tropospheric ozone present in the air in very high concentrations, which are toxic to the plant. The symptomatology begins with the appearance of small necrotic spots on the underside of the lower leaves that quickly evolve into light brown, shiny, sunken and smooth spots. As the crop progresses, the spots increase in size and also become visible in the beam, where they are darker. The mixture of the organic compounds of the air and the emanations of gases from the combustion of fossil fuels together with a high insolation, generates the so-called “photochemical smog”, which is characterized by having photo-oxidizing elements, such as ozone (O3), mainly responsible for the damage caused to potatoes and other vegetables. The highest concentrations of ozone are found in rural areas, because polluting gases from urban areas are displaced by the wind during their formation process. The fight against this physiopathy involves using resistant varieties and providing organic matter to the soil, which dampens the oxidizing action of ozone.

Peeling or immature skin is a physiopathy that occurs in early varieties that have not suberized well and consists of a lifting of the skin that results in the potato wrinkles in even suffering rots. It occurs when a short time passes between the destruction of the aerial part of the crop and harvesting; it is also favored by near-harvest irrigation and excess nitrogen.

Verdeo Occurs in tubers that have been exposed to light in the field or in the warehouse; chlorophyll is formed that is stored in leukoplasts, organelles located in the epidermis. Generally, the green does not have to predispose the tubers to rot, except in cases of very intense radiation. It happens if we harvest the tubers before they ripen. The most sensitive varieties should be deeper plants.