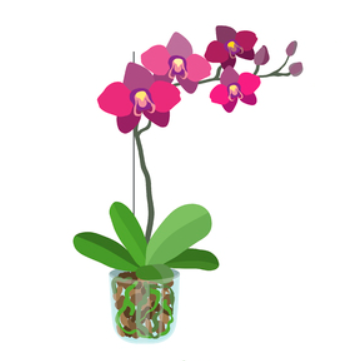 Reproduction of simpodial growth orchids As we saw in a previous article, simpodial growth orchids are those that develop pseudo-bulbs from a rhizomatous stem. Well, when the orchid has developed 6 to 8 pseudobulbs we are in a position to separate the plant by cutting the rhizome with scissors previously disinfected and applying healing paste in the cuts; we will place the new plants in their new pots with new substrate and in a place with little light. The operation can be carried out at the beginning of spring or beginning of autumn which is when the plants have the most reserves.

Once the plants are separated, we will proceed as in a transplant.

The reproduction of monopodial growing orchids are those orchids that have a single main stem that grows erect from the center of the plant. We will make sure that the rods are in perfect sanitary condition and we proceed to cut each rod into three pieces. With a sharp knifewe will throw the cover of the yolk and introduce the rods in a mixture of pine bark and sphagnum moss, moisten with a sprayer and cover with a transparent plastic; we place the rods in a place with little light. Every two weeks we uncover and moisten the substrate and if everything goes well before 10 weeks they must have taken root.

The diseases of orchids We have left for the last what for every grower of any type of plants is more complicated to fight and are the diseases caused by fungi, bacteria and viruses. Before seeing howtofight these diseases we will give some tips to prevent their appearance in our plants:

Once the affected plant we will isolate it and remove the affected parts. To combat the fungus we will use fungicides and the most effective are metalaxyl and etridiazole.

Erwinia carotovora produces the so-called “soft rot or mild rot” and can affect all the organs of the plant, spreading and rapidly. It begins as brown or black spots of appearance húmeda, which when growing form a rot of soft consistency, evolving to a necrosis of the tissues with an unpleasant smell. The bacteria penetrate the plant mainly through wounds and spread

As we have seen at the beginning, better to fight against bacteria is prevention and for this we have the good cultivation practices described above and the use of preventives such as copper sulfate, cupric hydroxide, Bordeaux broth, and antibiotics such as oxytetracycline and streptomycin.