The cultivation of cassava 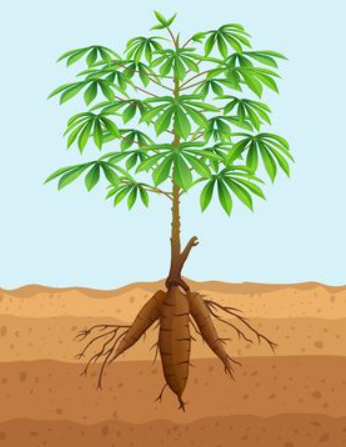 Cassavais one of the plants calledtobe relevant in the future of humanity and in this article we will see how to successfully carry out its cultivation.

The cultivation of cassava

The climate in the cultivation of cassava

The cassava plant in its area of origin grows in a wide range of climatic conditions; from the humid and warm tropics of the lowlands to the areas of medium altitude (1,800 masl) characterized by cold winters and high rainfall in summer.

Cassava can grow in almost any soil, but very clay soils can cause fungal problems and very stony ones prevent the normal development of the root system. The ideal soil is a loamy soil, loose, deep, with good drainage and a pH between 5.5-7. In areas of high rainfall or flooded soils, cultivation should be done on a plateau or horse to promote water drainage.

How is the yucca cycle

The cassava cycle lasts between 8 and 12 months and is divided into four stages:

1.-From the transplant until the end of the second month. It is a stage of slow growth; the root system begins to emerge between 5-7 days after planting the stakes and at 10-12 days the first leaves appear.

2.- Maximum growth. From the beginning of the third month to the end of the fifth; during this stage the final structure of the plant is fully developed, reaching at the end of this stage the maximum leaf area. In the middle of the third month the thickening of the roots begins. It is the stage of greatest physiological activity, due to the remarkable and rapid increase in biomass.

3.-Stage of filling the roots. During this stage the leaf surface begins to senescer and the leaves become smaller, but do not fall off. The translocation of the photoassimilated to the root is increased and goes from the end of the fifth month to the beginning of the fall of the leaves.

4.-Resting phase. The plant begins to lose the older leaves and completely stops vegetative growth; this phase lasts about a month. Although the plant decreases foliar activity, it continues with the process of starch accumulationand can be harvested at any time.

As for the process of root thickening, this is also divided into 4 phases:

The planting season of cassava

Preparation of the land This is the most important work in the cultivation of cassava, since the soil is the medium in which the most important part of the plant will be developed, commercially speaking:we are two passes with subsoil perpendicular to each other and depending on the texture of the farm one or two milling machine passes. Then we finish if the soil is heavy or we are in a high rainfall area; if we have a soil with good drainage and we are in a normal rainfall zone we can plant flat.

The vegetative material that is used as a “seed” in cassava cultivation is called a stake, which is nothing more than a portion of the stem of a mature plant; it is necessary to use mature plant so that each knot of the stake contains stored sufficient reserves that are used for the budding ofthe root system and the aerial stems. Stakes of a length of about 20-30 cm containing 5-6 knots are used.

The most common planting frames are 120 x 100 cm, 100 x 100, 100 x 80 and 80 x 80. We can sow vertically, vertically but inclined with an angle of 45º with respect to the ground or by burying the stem horizontally. If we do it vertically or inclined, the first thing to take into account is to put the yolk facing upwards because if we invest it will use a lot of time and energy to emerge; this is the most usual system and guarantees a rapid budding and a greater resistance to the plant breaking due to the action of the winds. Vertically we will bury 4 buds and 3 in inclined. In this system the root comes out of the buried end of the stake.

Horizontal planting is used in mechanized planting systems and the stake is buried 8-10 cm. In this system a greater number of roots is produced which results in stability of the plant, but it is not recommended for soils with poor drainage or areas of high rainfall because the rot of the stake could occur.

Cassava fertilization Cassava is a plant with a strong extraction of nutrients and it is estimated that for a production of 30,000 kg of fresh root the extractions of nutrients in UF are: