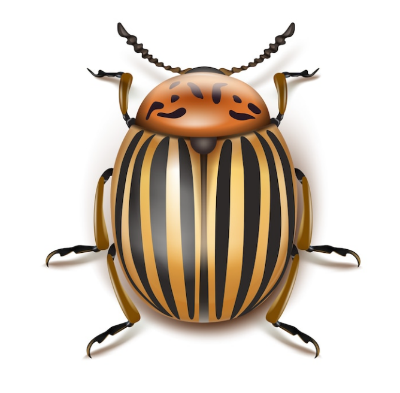 In this third installment on potato cultivation we will see the main pests that affect it and how to combat them.

Nematodes Nematodes are animals in the shape of a thin worm and there are numerous species that can attack the potato, but those that cause the most serious problems are nodule-forming nematodes (Meloidogyne spp.) and cyst formers (Globodera spp.). Other nematodes such as Ditylenchus destructor is not a problem yet in Spain, but it is in countries around us such as Germany.

Cysts on a root

The potato beetle Leptinotarsa decemlineata Say is a pest native to North America that arrived in Europe in the first quarter of the last century and in Spain in 1935. It currently affects a large number of countries. It has the typical shape of an oval-shaped beetle, strongly convex and with dimensions of 1 x 0.5 cm. The elytra, cream yellow, have 10 black longitudinal bands;p resents small black spots on the head and thorax. The eggs are light orange, oval in shape and about 1.2 mm in length. From them come the larvae, with an arched body, initially cherry red with a glossy black head and legs. In successive states they pass to a more orange color, with numerous black spots aligned on each side of the body. The cycle begins with the departure of wintering adults in spring and the laying of eggs on the underside of the leaves; each female lays up to 400 eggs in packs of 10-30 units which hatch in 4-12 days. Nymph status lasts for 10-20 days and then they become adults. The number of annual generations is 4, overlapping with each other. Adults can live up to two years, entering diapause at the end of autumn. The damage is caused by adults and especially by voracious larvae, feeding on leaf tissue. The application of insecticides has effects with adults and especially with larvae; the threshold for application of treatments is when 10 adults are detected per examined 25 plants per hectare. Chrysopas are large predators of eggs and larvae.

Wireworms are also beetles of the genus Agriotes spp. highlighting the species Agriotes sordidus, Agriotes curtus, and to a lesser extent Drasterius bimaculatus. Adults are beetles of elongated shape and blackor brown color with longitudinal grooves in the elytra. In the ventral area they have a jumping appendix that allows them to turn when they fall on their backs. The eggs are round and white and from them are born the larvae that are initially white and soft tissues, but that harden when molting, while darkening, reaching the typical yellow coloration and a high degree of chitinization in the last molts. The first adults appear in early March and disappear at the end of April; Although it has wings, its flight capacity is very limited. They lay 100 to 200 eggs in the ground buried a few centimeters; they like moist soils with vegetation cover. A month the larvae are born that at the beginning feed on organic matter to become phytophagous as they make molts. The larval stage can last from 1 to 5 years depending on the availabilityof food and are very sensitive to desiccation, moving to deeper layers of the soil following the water profile. In late autumn the last larval stage pupates in deep layers of the soil. The larvae feed on the tender shoots that emerge from the tubers causing nascence failures and also on the tubers, making galleries that disable it for commercialization. The damage is caused by the larvae from mid-cycle forward and the way to know the population that is in a plot is to make a hole about 20-30 cm deep and put a mixture of wheat and corn; it is covered again a week it is uncovered and a count is made. The best way to fight against doradillas is to apply insecticide at the time of planting.

Gray worms are caterpillars of butterflies of the genus Agrotis spp. These caterpillars kill the young flats by cutting them by the neck. The butterfly lays eggs in spring on the ground, on the plant itself or on weeds. The larva is very voracious and feeds at night, hence it is known as “malduerme”. If during the day we dig near the plant we will find the caterpillar coiled. It can also feed on tubers. The struggle involves destroying the remains of the harvest and applying insecticide when the population requires it. Lately they are being fought by the application of entomopathogenic nematodes.

The potato moth of the potato Phthorimaea operculella Zeller is an important pest of the potato. The adult is a microlepidopter of the family Gelechiidae measuring about 8-10 mm. It has wings of a grayish tone with small spots and abundant hairiness on the margin of the hind wings. The eggs are ovoid in shape and cream-colored, very difficult to see, measuring around 0.5 mm. The color of the larvae is milky white, with green and pink hues. Initially they measure just over 1 mm, finally reaching more than 10 mm. long. Adults are nocturnal and live 15-20 days. Females lay about 100 eggs in areas near the neck of the plant or in the tubers themselves if they are exposed to air, which hatch within 5-10 days of laying. The larvae go through 5 stages until they pudge, lasting the full cycle of 20 to 70 days depending on the temperature. The adult does not suffer from winter diapause, being the maximum activity from mid-May to early autumn. It has as guests, apart from potato, other herbs and tobacco, tomato and eggplant. The fight against this pest involves planting early varieties, not exposing the tubers to the air, and chemical control; the treatment threshold is when 10 individuals are caught in the traps with pheromones at times close to harvest. Be careful with the safety period of the active materials we use.

The main aphid species affecting potato cultivation are Aphis fabae, Myzus persicae Macrosiphum euphorbiae, Aphis craccivora and Aphis gossypii. Aphids cause direct damage by feeding by sucking the sap of the plant, to the detriment of it. If the attack is severe, development is stopped, the internodes are smaller and the leaves curve. Often observed on the plant the presence of molasses excreted by aphids. However, in potato cultivation, the indirect damage they cause, especially Myzus persicae, by being able to transmit different viruses, is generally considered more serious. The maximum danger occurs in the case of the seed potato, which is why this must be carried out in aphid-free areas. Control measures, in the case of potatoes for consumption, are not usually necessary in the growing conditions of our area. The treatment threshold has been established in 25% of plants with the presence of aphids.

Damage by aphid in potato